By: Emily Blake and Emily McCarty

When Trevor Blackman-­Wulff was growing up in Squamish B.C., he didn’t fit the mould in the small logging town located between Vancouver and Whistler.

Blackman­-Wulff remembers being five years old and hearing his grandparents joke about “fags and Indians” at the dinner table. He worried there was something wrong with him because he was both those things.

In grade five, “fag boy” became his new moniker at school. The bullying came to a head at Howe Sound Secondary, when a student called him out in front of his entire class for wearing women’s pants.

“The entire theatre heard, which made my whole situation of being bullied that much worse,” Blackman-­Wulff recalls. “Those were a pair of pants I never wore in Squamish again.”

He was gay­-bashed three times and experienced years of bullying and harassment. 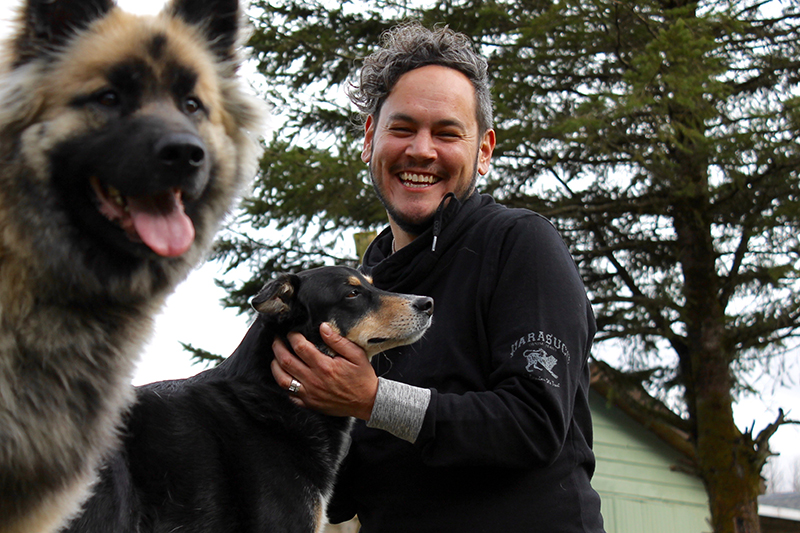 You wouldn’t know it from meeting Blackman­-Wulff, now. His laughter is infectious, his smile often brings out his dimples and the 37­-year-­old wears the same stylish outfits that were once mocked in high school.

Blackman-­Wulff, a member of the Ashcroft First Nation, now works with queer youth at his old high school in a group for kids like him.

In 2014, the Diversity Club at Howe Sound Secondary asked him to speak about his experiences with homophobia. They hold meetings in that very theatre Blackman-­Wulff was humiliated. After the discussions about sexual identity and gender, the high schoolers agreed they needed a separate space for those topics. In fall of that year, Safe n’ Sound was formed.

Safe n’ Sound is the first ­and only LGBTQ+ group in Squamish, founded by students at Howe Sound Secondary. In the first year, the group planned the first ever Pride celebration in Squamish.

Safe n’ Sound hosts monthly meet­ups involving queer youth, their parents, and allies. On average, less than 10 people attend, and parents usually come with their children. Blackman­-Wulff says with fewer people, the meetings are more heartfelt. He says the youth tend to have more knowledge than their parents on the subject so it’s “invaluable for everyone involved.”

Infographic: What is Two-Spirit?

This year, the all-­day Pride event was held at Howe Sound Secondary. Speakers shared their own struggles with sexuality and community resources set up booths. Most importantly, it provided a place to connect.

“Hearing the stories is a really awesome opportunity to learn,” says Ashleigh Giffen, a senior from Howe Sound who was at the Pride conference. “I’m really excited to hear from different perspectives.”

Queer as a “white thing”

Giffen has been a part of Safe n’ Sound since it began. She came out to her peers last year during her junior year in high school. Giffen says she struggled with her sexuality since middle school and joined Safe n’ Sound to meet other LGBTQ youth.

“Once I joined, I learned that several of my other friends were actually on the queer spectrum and we could now finally talk about it,” says Giffen. “I finally had friends. I didn’t feel like I was going to be alone.”

Giffen is a member of the Kahkewistahaw First Nation who grew up in Squamish. Much like Blackman­-Wulff, she says she dealt with racism and homophobia growing up. In elementary school, she was called racist names and told she and her family were alcoholics. In middle school, the bullying focused more on sexual identity.

Giffen says the group openly talks about Indigeneity and acknowledges white privilege in the queer community.

“It seems like being queer is almost a ‘white thing.’ It’s almost like you can’t be two minorities at the same time,” says Giffen. “I’ve struggled with that. Finding which one I fit in [with] more.”

Blackman­-Wulff wants to embrace all parts of his identity equally. He hopes to connect more with his heritage. He also wants to bring back respect for Indigenous sexuality, especially recognition for two­-spirited people.

“I think a lot of it has been lost in the shuffle. If we look back, two-­spirited people were held very highly within their community and I think that type of respect is something society can really learn from,” Blackman-­Wulff says. “We should be celebrated because we’re having the courage to live authentically.”

And he is living the authentic life he always wanted. Blackman­-Wulff got married in 2014 to his partner of seven years, Jason Blackman­-Wulff, in an outdoor ceremony in Squamish.

Listen: The most beautiful day of Trevor’s life

“I didn’t think I would ever be comfortable coming out, never mind getting married here to the love of my life,” Blackman-­Wulff says.

He attributes the change to the passing of time and an influx of new people. “It’s led to more open minds and acceptance,” Blackman­-Wulff says.

“Acceptance really needs to be across the board, and not just with the LGBTQ+ community,” he says. “We’re all human beings, we all bleed if we’re cut. Who would want to be the same as everybody else? And that’s what makes the world.”

Emily Blake is a multimedia journalist whose passions include audio, feminism, ethics and cats. You can follow her on Twitter at @BlakeEmily

Emily McCarty is a multimedia journalist, videographer, and roller derby girl. Follow her on Twitter and IG @emjmccarty