Reporting in Indigenous Communities | Elders looking to help govern youthful B.C. First Nation
Elders are hoping to have a greater voice in the governance of the Tsawwassen First Nation in B.C.
15753
post-template-default,single,single-post,postid-15753,single-format-standard,ajax_fade,page_not_loaded,,qode-theme-ver-6.6,wpb-js-composer js-comp-ver-5.1,vc_responsive 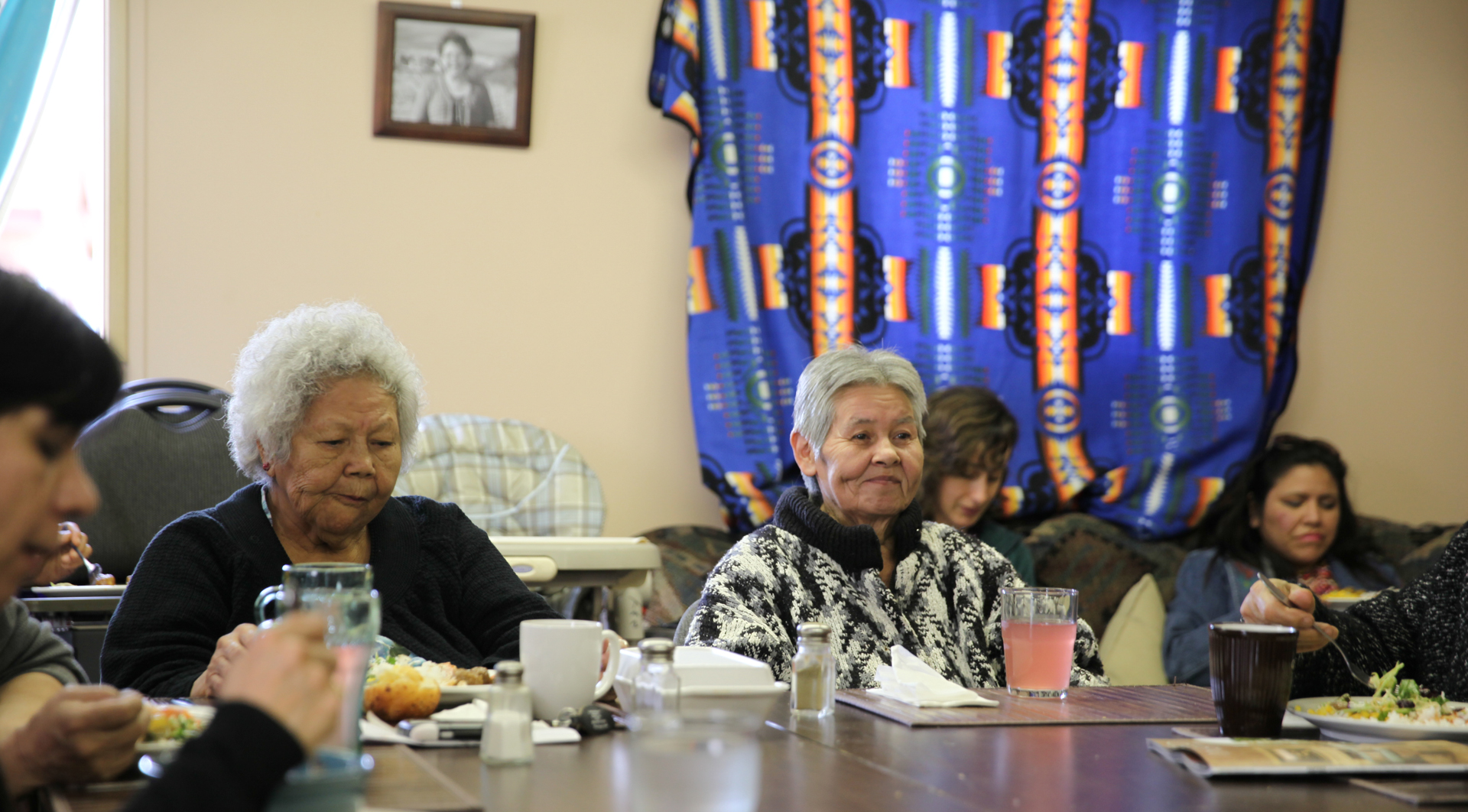 Will new seat in Tsawwassen First Nation legislature be reserved for elder?

Posted at 08:40h in Stories by admin
0 Likes
Share

By Ryan Erwin and Paolo Pietropaolo

Elders are hoping to have a greater voice in the governance of the Tsawwassen First Nation in B.C.

The Tsawwassen First Nation (TFN) has been governed by a 13-member legislature since its historic 2009 treaty. Next year, a new seat will be added to the Tsawwassen legislature due to a rapidly growing population.

Elder Ruth Adams hopes the government will consider reserving that position for an elder.

“We’ve got enough young ones in that legislature so I think we need an old person in there,” says Adams. “Somebody who has the history.”

Adams is an energetic septuagenarian with piercing dark eyes that have watched her community live through hard times and the triumph of the treaty. Just by virtue of her age, she is a rarity on the Tsawwassen First Nation.

Adams says the Tsawwassen First Nation has only about 15 elders.

HOW THE TFN GOVERNMENT WORKS:

The 472-member Tsawwassen First Nation is getting progressively younger, reflecting a trend seen across Canada among First Nations populations.

The TFN government says the growth of its young population base is the principal reason the population has increased by more than 100 since the 2009 treaty.

As of April 2015, 52% of the population of Tsawwassen First Nation is under 25 — almost twice the national rate.

The TFN constitution calls for the legislature to be expanded by one seat whenever the population increases by 100.

“No matter what, it’s going to be a different voice, whether it’s an elder or another community member. We’re all happy to have another voice to speak for the community and for the people.”

But Tsawwassen elder Shirley Larden says the problem is that elders don’t have enough of a voice in the community. 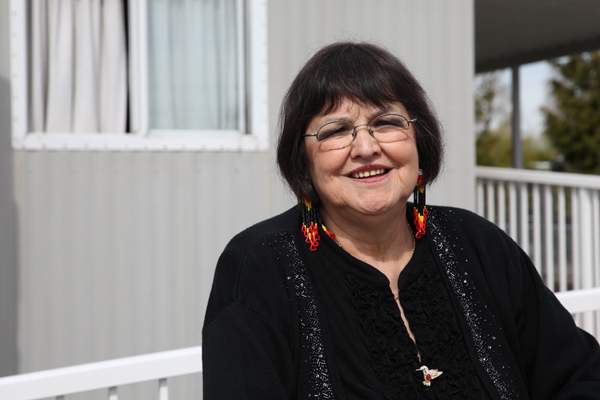 Ruth Adams, an elder from the Tsawwassen First Nation (TFN), sits on the Advisory Council for the TFN government and is very active within the community. (Photo: Paolo Pietropaolo)

Larden thinks a dedicated elders’ position in the TFN legislature would be a good idea “if (the elder’s) decisions were respected.”

“We’ve had a series of young chiefs. If there’s a movement (by) young people, it usually ends up going ahead.”

Loss of language and culture

Every Tuesday and Thursday, elders gather for a hot lunch at the Elders’ Centre. They sit together around a large table, eating salmon, telling stories and sharing the latest gossip.

The centre also hosts language lessons on Wednesday evenings. The Tsawwassen formerly spoke Hun’qumi’num, a Coast Salish dialect, but there are no fluent speakers left.

The loss of language and culture is a legacy of the residential school system and other events that occurred in the 20th century. The Tsawwassen longhouse was demolished by the B.C. government in 1958 to make way for the nearby B.C. Ferries Terminal. 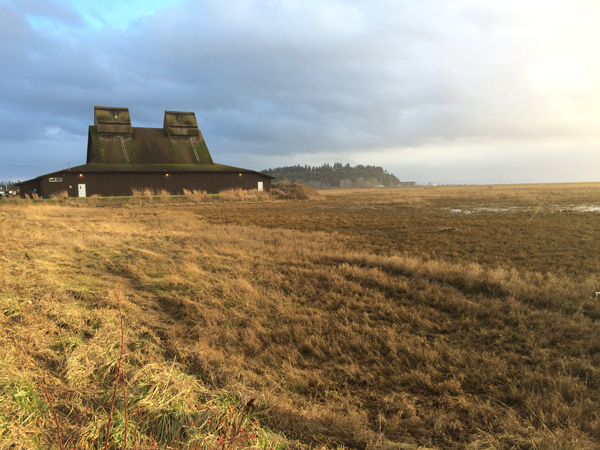 The new longhouse, completed in 1997, is part of TFN’s quest to reclaim its language and culture. (Photo: Paolo Pietropaolo)

“The longhouse was taken away, the church was taken away — so Tsawwassen First Nation had no beliefs for a long time,” says Adams.

The role of the elder

“There needs to be some sort of institutional intervention (in Tsawwassen) to ensure that elders’ perspective is included in decision-making,” says former Tsawwassen chief Kim Baird.

Elders have long held a mentorship role in many First Nations communities, passing down history and culture to future generations and providing guidance to community leaders.

She says TFN could give elders a greater voice through direct consultation or through the formation of an advisory body.

Another self-governing First Nation in B.C., the Nisga’a Nation, does include elders in its governance structure. A four-member Council of Elders is appointed by the Nisga’a government. The council is led by a chairperson — an elder elected by all Nisga’a citizens.

The council’s mandate is to provide guidance and interpretation of Nisga’a traditional laws and practices.

Chief Williams says he’s interested in researching the Nisga’a model and learning about how the council’s interactions and decisions affect Nisga’a governance. He concedes involving the elders on some level in Tsawwassen could be beneficial.

“I think it would be valuable…I’m open to different ideas that might be brought to the table in terms of involvement of elders in the governance structure.”

“The one thing I’ve learned is in our tradition you don’t force things,” says Adams.

Although Adams would like the new seat on the TFN legislature to be reserved for an elder, she thinks it needs to happen organically.

She plans to talk about the issue at the elders’ luncheon so the other elders can weigh in. Adams says the luncheon is where other elders feel most comfortable giving voice to their opinions.

“That’s when they speak up and I’m happy for that.”

Even if TFN decides to create a dedicated elders’ position in the legislature, the challenge may be in persuading other elders to run for the position.

“They are not very public and they don’t seem too likely to be involved in (government),” says Adams. “But that makes it more important for me to keep going.”

Williams plans to reflect on the matter and discuss it with his colleagues in the legislature. “Of course, elders have a lot of valuable information and ideas,” he says. “So it’s something to consider.”

“Whenever an elder speaks up, you listen.”

Paolo Pietropaolo is a student at the UBC Graduate School of Journalism. You can follow him on Twitter @Paolopp

Ryan Erwin is a student at the UBC Graduate School of Journalism. You can follow him on Twitter @RyanAErwin