From the UBC Graduate School of Journalism: Reporting in Indigenous Communities, the only journalism course in Canada to focus exclusively on Aboriginal news stories. 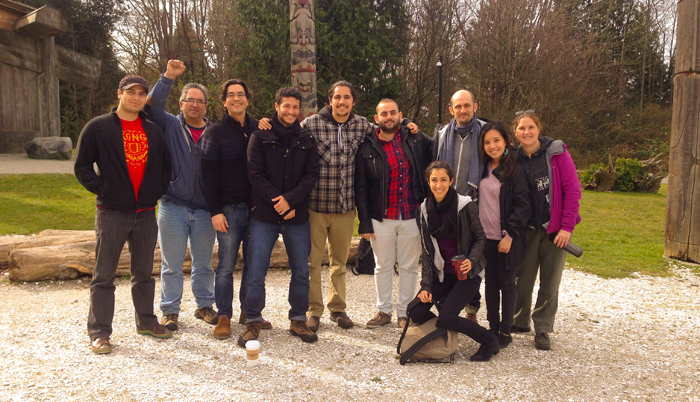 The logo for our Reporting in Indigenous Communities website is a Coast Salish-inspired design, in recognition that the University of British Columbia is located on the traditional territory of the Musqueam First Nation and to acknowledge the Coast Salish heritage of the First Nations we cover in B.C.’s Lower Mainland.

The camera lens in the middle signifies our role as Journalists and Witnesses, and symbolizes a circle that, in many Aboriginal cultures, represents interconnectedness.

Attached to the lens, the logo has crescents and trigons — key design elements of Salish art. Salish artists often combine these symbols to represent a feather.

Our logo has four crescents, which symbolize the Four Directions, in recognition that Indigenous people from many different Nations now call Vancouver and the Lower Mainland home. Likewise, our students at the UBC Graduate School of Journalism come from across Canada and around the world.

You can learn how to pronounce siyólexwe here.

While we were eager to find a word from an Aboriginal language for our title, it’s a challenge in a place such as the Lower Mainland, where Coast Salish peoples traditionally speak several distinct languages (not to mention all the languages spoken by urban Aboriginal residents, such as Carrier, Kwak’wala, Anishinaabe, Cree and many others).

When it comes to “elder” or “senior” it was particularly tough to find a common word amongst our partner communities.

The Sḵwxwú7mesh word for water is “siyúyux̱wa.” And Halkomelem has two dialects: downriver and upriver. Upriver dialect is more properly called Halq’eméylem (spoken in over two dozen communities from Aitchelitz to Yale), Downriver dialect is more properly called Hən̓q̓əmin̓əm̓ (spoken in six communities including Musqueam, Tsleil-Waututh and Tsawwassen).

So, we settled on “siyólexwe.”

Thank you… haychka siem… kw’as hoy… chen kwen mantumi… miigwech… to all those who have shared advice and expertise in Aboriginal languages, including Khelsilem Rivers, and firstvoices.com.

For additional information, check out Duncan’s online guide to Reporting in Indigenous Communities, a place where journalists and journalism students can learn useful ideas and practical methods for finding and developing news stories in Indigenous communities.

RIIC in the news

– The Tyee: New UBC course takes on representation of Aboriginals in media